We Choose Peace In Taking the Other Road...

but "The Road not Taken" will always be at the other crossroad... 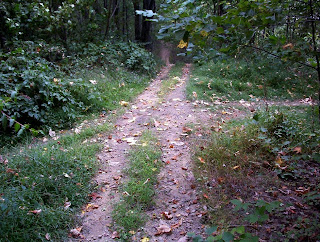 "The Road Not Taken"
A poem by Robert Frost
published in 1915 in his collection Mountain Interval
Two roads diverged in a yellow wood,
And sorry I could not travel both
And be one traveler, long I stood
And looked down one as far as I could
To where it bent in the undergrowth;

Then took the other, as just as fair,
And having perhaps the better claim,
Because it was grassy and wanted wear;
Though as for that the passing there
Had worn them really about the same,

And both that morning equally lay
In leaves no step had trodden black.
Oh, I kept the first for another day!
Yet knowing how way leads on to way,
I doubted if I should ever come back.

I shall be telling this with a sigh
Somewhere ages and ages hence:
Two roads diverged in a wood, and I—
I took the one less traveled by,
And that has made all the difference.

According to Wikipedia, the poem has two recognized interpretations. One is a more literal interpretation which most readers see it to be - inspirational, a paean to individualism and to non conformism, while the other is more ironic - critics typically view the poem this way because instead of regret and personal myth-making, it is rationalizing our decisions. Frost himself warned about this poem - "You have to be careful of that one; it's a tricky poem – very tricky."

I am not going to a make a critical analysis of the poem (I'll leave that to the English Literature guys from the academe... ) because whether it is literal or ironic, the two roads we faced today were exactly opposite to each other but would have led to the ultimate goal that the OFW wants to achieve - RESPECT!

OFWs have had differing opinions on how to deal with the problem. The other group chooses the road of peace - peace talks and treaties, truce and ceasefire while this corner and some August 31 celebrants (another semantics for OFW because of today's Philippine celebration) believed in waging war, in the use of tomahawks and howitzers, in imposing blog-embargo and boycotts, and for a military-care, to borrow the words of our militia.

There was no more time left... decision had to be immediate because we were at the crossroad. The initial conditions for an interim 'peace' entered into by the peacekeepers was complied with by the fatigued and somnolent fighter. An act which we construed as just a defensive scheme for fear of the consequence of the blog-war declaration... We wanted a retraction and an apology for that malicious and irresponsible blog-post but it never happened, yet we are still hopeful for it to be posted soon.

Which road then should we go - is it this way or that way? One road had foot trails and leaf-covered path and the other road had almost-forgotten-trails, swampy where you could hear the deafening sound of croaking frogs echoing throughout the forest.

Thus, whether or not the condition complied with was acceptable to all, we had to stand by the word that our peacekeepers gave because it bespeaks of who we are - we respect the stand of others, we respect ourselves and we put our hand where our mouth is! We may have made mistakes and lapses in our judgment but we're willing to exhaust all means to attain peace... always ready to admit and make amends if necessary for the best interest of all through a fair process, playing fairly and squarely the rules of engagement!

There were no heated arguments on how to deal with it... There were no strategic plannings and brainstorming... The crossroad that was like a chimera where the pros and cons were one by one weighed in a justice scale was the same crossroad that became a witness to the spontaneous unity of the diversities of the OFWs.

The decision to temporarily take the road of peace was carried out... a decision that was determined by the OFWs' priorities - our beliefs, our guiding principles, and our stand and conviction on the issue. It was our character that became the umpire in making the call, even if it was not the easy and the more popular choice. It was a decision for the good of the OFWs, a decision for our families, and for peace to reign in the whole of bloggywood. A decision befitting the 31st of August Philippine celebration commemorating the victory of our (modern-day) heroes.

What happened to the road not taken?

It's still there... it will be at the other crossroad of our journey. The tomahawks and the howitzers have not been buried and cached. All the weapons are still in a firing position and are all the time ready to be fired when faced with any external threat.

God forbid that it will happen again but if it did the Manifesto of what we believe in shall once again be put at the forefront. We will act by what we believe in and we will never allow anyone to attack, malign, insult, abuse and exploit the state of affairs of the OFW.