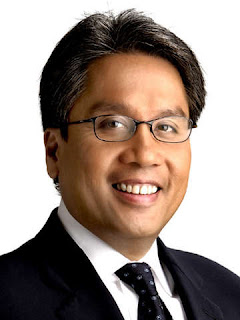 Noynoy was suddenly catapulted to such popularity when calls for him to seek a higher post in 2010 emerged after the death of his mother, former President Corazon Aquino.

Yet, despite the backing and preference of Former Senate president and LP chairman Franklin Drilon and former Senate President Jovito Salonga for a Mar-Noynoy tandem, with Noynoy as the vice presidential candidate (That was my combination-preference too). Mar humbly backed-out of his dream to become the President of the Republic of the Philippines.

During in an impromptu speech at Club Filipino, Mar Roxas said that he is giving his support to the candidacy of Noynoy Aquino.

"Let us not remain a country of dreamers," Roxas said in his speech. "Today I am announcing my support for the candidacy of Noynoy as the president of the Philippines."

Here's the full transcript of that speech courtesy of abs-cbnnews.com. It was very well said and I have to admit that it brought a lump to my throat.

Our nation is in trouble. Leadership is bankrupt. Institutions are in disarray. People are hungry.

Noynoy Aquino and I share the same outrage over the mess we are all in, the same way we share the solution-clean, honest, selfless public service.

We need to fight just as our own fathers fought dictatorship, and just as both died believing that good will conquer evil.

Noynoy and I want to make a difference, but we also know that we need to unite to achieve what we want.

I am the President of the Liberal Party.

It is within my power to preside over a potentially divisive process or to make the party a bridge for the forces of change. I choose to lead unity, not division. Bilang pinuno ng aking Partido, magdedesisyon ako.

He inspired me-to stay the course, to fight the good fight, to pass the test of true character. To believe.

Over the weekend, Noynoy and I had many long conversations... Masinsinang usapan. We agreed: Let us forget about ourselves for a moment. This is not about us, this is about our people and our country. This is about our common dream. The dream of our parents.

Today, I am announcing my support for the candidacy of Noynoy Aquino for President in 2010.

Noy has made it clear to me that he wants to carry the torch of leadership.

The passing of our beloved former President Aquino has reawakened a passion among us. I acknowledge this as fuel to bring us to the realization of our dream: Good will triumph over evil.

Ito na ang pinakamabigat na desisyon sa buhay ko. Maniwala man kayo o hindi, ginagawa ko ito para sa bayan, para sa inyo. I do this for unity in support of change. And if that means that somebody must make the sacrifice, it must be me. Ako na.

To you Noy, I say: I began the campaign to sow the seeds para sa pagbabago at reporma. You must now be the one to grow them in the arena of leadership.

Hindi kami maghihiwalay ni Noy. I will stand with him.

Mar Roxas, you stand much taller after forfeiting and sacrificing your political career for the sake of change!

May God bless you and may you find favor for that promotion at the right time!
Posted by NJ Abad at 2:25 PM