What's in a Name?


"What's in a name? That which we call a rose by any other name would smell as sweet" ~William Shakespeare, Romeo and Juliet, 2.2

When I was a small boy, I disliked my name so much that I blamed my parents for not giving me a name that my classmates and teachers can pronounce well and remember easily. I still remember the eyebrows of my teachers arch up the first time they roll call the students enrolled in their class. My classmates called me a nickname, they coined themselves - "Ner". Thus, when I was enrolled at UP Diliman and stayed at the dormitory, I preferred to introduce myself as "Bong", the endearment which my family calls me. It was then that I was publicly known by that name.
Most of my professors at UP use the last name of their students in class but it was there that I would hear remarks on how they liked my name. A couple of young teachers even asked permission from me that they will use my name for their kids (I really dunno if I have namesake from among their children...)

When we had our first child, I argued to the max with my wife not to use Jethro as the second name of my firstborn. It was only when she reasoned out that she was the one who carried the fetus for 9 months and for her be given the preference for the choice that I conceded. (I got to know that she loved me that much to have named our first son after me...)

I really cannot remember why after so many years, I decided to use "Jet". I started introducing myself with the new name. My classmates and friends who have not been in contact with me for so many years wondered and suspected that the change had something to do with a "criminal concealment"...(LoL).

As I look back through all the years with family and friends calling me different names - Bong, Ner, Jet, Abad, I realize that my name might not be much of a name, but it's mine. It's one of the few things I was born with, and it's one of the few things I'll have my whole life and take to the grave with me. I will live every moment of my life to live up to what my name stands for and give justice to its meanings: 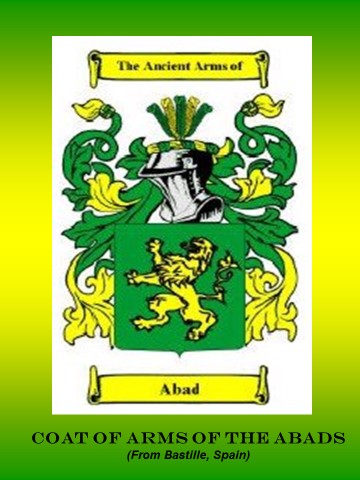 Nereus \n(e)-reus\ is of Greek origin. Greek sea god. The son of Pontus (a personification of the sea) and Gaea, he was noted for his gift of prophecy and his ability to change his shape. He lived at the bottom of the sea with his daughters, the Nereids. Heracles wrestled with him in a variety of shapes in order to gain his advice about recovering the golden apples of the Hesperides.

Jethro \j(e)-th-ro\ is pronounced JETH-roh is of Hebrew origin, and its meaning is “eminent”. It is from the Hebrew name יִתְרוֹ (Yitro), which was derived from the Hebrew word יֶתֶר (yeter) meaning "abundance". Jethro was the father of Moses's wife Zipporah in the Old Testament. A famous bearer of the name was Jethro Tull, an inventor and agriculturist from England.

Abad originated in Spain in the 1400s. The family name is originally from Northern Spain, Basque Region. The reason why our name sounds so Arabic is because it probably originated in North Africa. Another belief is that the Abads were Moos, and Moors invaded Spain around the early 1500s. In Spanish usage, "Moro" (Moor) came to have an even broader usage, to mean "Muslims" in general (just as "Rumi", "from the Eastern Roman Empire", came to mean "Christian" in many Arabic dialects); thus the Moros of Mindanao in the Philippines, and the Moriscos of Granada. Moro is also used to describe all things dark as in "Moor". Abad is also in the Arab language, usually meaning "town", which is why the Abads may also be Arabic. In Spanish, "Abad" is the title given to the head priest of a Church. A reason why many Abads are Filipinos is because the Spaniards travelled to the Philippines in the 1700s.

I thank my dad and mom for naming me such a beautiful name. (They named my siblings very well too - Ardes Riz, Monina Laine & Zona Zorina... or is it because they've got unique names as well - Artaban & Praxedes). I realized that my parents took painstaking moments and not just a "spur of the moment" creation to give me my name.

I'm also thankful that me and my wife Christine have given great names to our kids with the hope and expectations that they will live up to to their names - Kevin Jethro, Gabrielle Khryss and Chloe Eunice.
Posted by NJ Abad at 7:22 PM No comments:


A Filipino walks into a bank in New York City and asks for the loan officer. He tells the loan officer that he is going to the Philippines on business for two weeks and needs to borrow $5,000. The bank officer tells him that the bank will need some form of security for the loan, so the Filipino hands over the keys and documents of new Ferrari parked on the street in front of the bank. He produces the title and everything checks out.

The loan officer agrees to accept the car as collateral for the loan. The bank's president and its officers all enjoy a good laugh at the Filipino for using a $250,000 Ferrari as collateral against a $5,000 loan. An employee of the bank then drives the Ferrari into the bank's underground garage and parks it there.

Two weeks later, the Filipino returns, repays the $5,000 and the interest, which comes to $15.41. The loan officer says, "Sir, we are very happy to have had your business, and this transaction has worked out very nicely, but we are a little puzzled. While you were away, we checked you out and found that you are a multi millionaire. What puzzles us is, why would you bother to borrow "$5,000"?

The Filipino replies: "Where else in New York City can I park my car for two weeks for only $15.41 and expect it to be there when I return'"