Unstoppable Croaking and Other Frog Stories


"Do not consider painful what is good for you." -- Euripides

A postlude to the illusion on the Croak of Death...

What I expected to be a statement from a gentlemen never pushed through but instead found the removal of the post for what I personally feel is a fear of a ramification of an imminent blog-embargo.

I wouldn't have preferred seeing that face undergo a plastic surgery at Vicky Belo's clinic... for it wouldn't have been a surgery to remove the thick papier mache of dollars, pounds, dirhams and riyals because such layer of money bills can only be reserved to the money-faced caregivers and ofw slaves who wipe the asses of their masters... what do you think did Vicky Belo and her assistants find out when they operated on that face?

I would have preferred seeing the blogger go through a heart surgery...

A change in blogface may not necessarily mean a change of the blogger's heart...

They say that if you put a frog into a pot of boiling water, it will leap out right away to escape the danger. However, if you put a frog in a kettle of cool water, and gradually heat the kettle until it starts boiling, the frog paddles about happily unaware of the threat until it is too late. The frog’s survival instincts are geared towards detecting sudden changes.

The OFW bloggers have detected the sudden change and there's no stopping the frogs to do the traditional croak of death!

The Two Frogs - A Parable 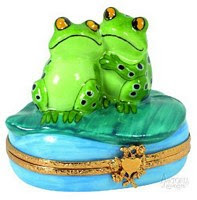 One inhabited a deep pond, far removed from public view; the other lived in a gully containing little water, and traversed by a country road.

The Frog that lived in the pond warned his friend to change his residence and entreated him to come and live with him, saying that he would enjoy greater safety from danger and more abundant food.

The other refused, saying that he felt it so very hard to leave a place to which he had become accustomed.

A few days afterwards a heavy wagon passed through the gully and crushed him to death under its wheels.

A willful man will have his way to his own hurt.


The Scorpion and the Frog - A Parable

One day, a scorpion looked around at the mountain where he lived and decided that he wanted a change. So he set out on a journey through the forests and hills. He climbed over rocks and under vines and kept going until he reached a river.

The river was wide and swift, and the scorpion stopped to reconsider the situation. He couldn't see any way across. So he ran upriver and then checked downriver, all the while thinking that he might have to turn back.

Suddenly, he saw a frog sitting in the rushes by the bank of the stream on the other side of the river. He decided to ask the frog for help getting across the stream.
"Hellooo Mr. Frog!" called the scorpion across the water, "Would you be so kind as to give me a ride on your back across the river?"

"Well now, Mr. Scorpion! How do I know that if I try to help you, you wont try to kill me?" asked the frog hesitantly.

"Because," the scorpion replied, "If I try to kill you, then I would die too, for you see I cannot swim!"

Now this seemed to make sense to the frog. But he asked. "What about when I get close to the bank? You could still try to kill me and get back to the shore!"

"This is true," agreed the scorpion, "But then I wouldn't be able to get to the other side of the river!"

"Alright then...how do I know you wont just wait till we get to the other side and THEN kill me?" said the frog.

"Ahh...," crooned the scorpion, "Because you see, once you've taken me to the other side of this river, I will be so grateful for your help, that it would hardly be fair to reward you with death, now would it?!"

So the frog agreed to take the scorpion across the river. He swam over to the bank and settled himself near the mud to pick up his passenger. The scorpion crawled onto the frog's back, his sharp claws prickling into the frog's soft hide, and the frog slid into the river. The muddy water swirled around them, but the frog stayed near the surface so the scorpion would not drown. He kicked strongly through the first half of the stream, his flippers paddling wildly against the current.

Halfway across the river, the frog suddenly felt a sharp sting in his back and, out of the corner of his eye, saw the scorpion remove his stinger from the frog's back. A deadening numbness began to creep into his limbs.

"You fool!" croaked the frog, "Now we shall both die! Why on earth did you do that?"

The scorpion shrugged, and did a little jig on the drowning frog's back. "I could not help myself. It is my nature."

Then they both sank into the muddy waters of the swiftly flowing river.

“Self destruction, it’s my nature…” said the scorpion.


Adapted from Frog Fables and Parables