How the Philippines Can Save the World! 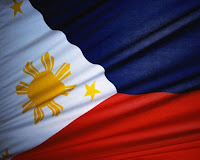 It always inspires me to read articles that speaks well about the Philippines - call that nationalism or just a mania to hear positive words about our country. It's not that we should stay blind to issues that are real and are daily affecting us, but we need from time to time get some "breather" from all those self-proclaimed pundits that say that the Philippines is just good for its DHs and cheap labor.

Here's one opinion (a blessing and not a curse for the Philippines) that will make every Filipino glad especially in the midst of this threatening global economic crisis.

Thanks Dads* for sharing this nice article.


How the Philippines can save the world
Written by Outside the Box / John Mangun
Monday, 02 February 2009 20:24

Disappointed and discouraged are the only ways to describe my reaction to those Filipinos who continue to bash the Philippines.

The release of the nation’s 2008 economic numbers (ahead of the time I thought they would be) could have been a moment of just a little amount of Filipino pride. When you look at countries like Spain, Singapore, Japan and others that saw their economies shrink in 2008, the Philippines did not do badly, all things considered. Instead, we got comments like this: “The supposed growth in the economy in recent years should be taken with a grain of salt.”

The millions of Filipino individuals and Filipino-owned businesses who made that 4.6-percent gross domestic product (GDP) growth happen clearly showed that, not only “The Filipino Can” but “The Filipino Did.” To every Filipino worker and every Filipino business owner who worked harder and never gave up—unlike that man in Los Angeles who recently killed himself, his wife and his four children after losing his job—stand tall and be proud.

We survived and even prospered a little through times of P50-a-kilo rice and P60-a-liter gasoline. Perhaps having the words “Economist” and “UP” on your resume means that you make so much money, anything less than a new Mercedes every year means the country is in a recession.


As another example of how clueless economists can be about the Philippines, Simon Wong, an economist at Standard Chartered Bank said, “I think most of the growth came from government spending.” While another “expert” Nicholas Bibby, an economist at Barclays Capital was quoted, “My suspicion is the upside surprise probably came from private consumption [spending].”
Keep doing your analysis gentlemen. Even a broken clock tells the right time twice a day.

I can remember when the foreign press used to describe the Philippines as “a basket case,” and “the sick man of Asia,” not with comments like “Overall, the Philippines will be better insulated from the collapse of external demand compared with other Asian economies.”

Why is there so little pride in the positive economic developments and accomplishments that the Philippines has made since the Edsa revolution? I believe it is the result of the pervasive “colonial mentality” after Edsa. The nation had come out of a black and stagnant economic prison. The Philippines sat at the feet of Western experts, like children looking for answers.


We embraced with enthusiasm most of their advice. We were told to “globalize” and we did. And then we saw our export products barred entry to other “free” markets. Our agricultural products were deemed unfit for Australia and Japan. Yet Mexico shipped their mangoes to the US, stealing Filipino heritage by calling them “Manila Mangoes” because no one would buy “Mexican Mangoes.”

Treated like the black sheep of the world economy, the Philippines was told and even warned that the only road to prosperity was to rely on exports for economic growth. Yet today, large and small economies that believed that theory are suffering the most during this global economic contraction.

Overseas Filipinos were scorned and insulted for being just domestic helpers. Now the world’s shipping industry would stop and the West’s hospitals would close if not for Filipino workers. Not too long ago, a Filipina in Japan was obviously a prostitute. Now Japan begs for our nurses and caregivers, needing 500,000 by 2016.

Seven years ago, most Western companies laughed at the idea of outsourcing to the Philippines. Now, the Philippines and India, with a population 10 times as large, controls 50 percent of the world’s outsourcing business. And our growth rate is double that of India’s.

The Philippines always hits high on the list of “corrupt countries” and the local press seems to delight in that fact, never saying that perhaps that sort of evaluation might be exaggerated in this sense: name a single major Filipino company, public or private, that ever put a nonexistent billion dollars on its balance sheet as India’s Satyam Computer was recently discovered doing. Where is the example of a Filipino Enron, Lehman Brothers or AIG?

Filipino banks were once heavily criticized for being much too small and undercapitalized. Again, where are the Philippine bank failures, except for a few, possibly crooked, rural banks that probably should have been closed years ago. Further, by the most important gauge of a bank’s financial strength, Filipino banks are twice as strong as most of those in the West. A bank’s capital adequacy ratio (CAR) measures the amount of total assets against risky assets, such as bad loans. The Filipino banks’ CAR usually runs twice as high as what is required by international standards. Thus, there are no Washington Mutual or IndyMac Bank type failures in the Philippines.

At the World Economic Forum in Davos, Switzerland, President Arroyo, as she does from time to time, gave a brilliant speech to an international audience. I saw her do it once at an Asian Development Bank forum, impressing global business and political leaders.

In Davos, she politely reminded the West that for the last 10 years, they pursued polices that drove their economies into a black hole. Countries like the Philippines used that time to build themselves up. The President called for the West to included countries like the Philippines in all further global economic discussions so the West might learn some “helpful new ideas.”
I agree and using our strong points, of which you should be proud, might just help save the global economy.


*Dads Torrico is our IT Manager for Application Support and a Six Sigma Black Belt at National Prawn Company
Posted by NJ Abad at 12:28 PM