Kuya is Secretary Alberto Romulo of the Department of Foreign Affairs.

Last week I received a forwarded email from a friend which was forwarded by another friend, forwarded by a boss... by a colleague... by another friend... by a brother, or a sister, or a spouse, etcetera, etcetera. That email purportedly claimed that the advisory came from the DFA informing that the green colored Philippine Passport will only be valid until January 2010 afterwhich, it will no longer be accepted even if its expiration date is beyond the deadline set by the DFA. Being a good friend, brother, husband, kabayan, etcetera, etcetera... i also forwarded it for information to all kapwa Pinoys I know.

Here's the text of that e-mail:

Dear Friends,
Please take note of this advisory and disseminate this to your loved ones, relatives, colleagues, friends.....
For your information and guidance.

ADVISORY
Department of Foreign Affairs Travel Agency Section. Please be advised that effective January 2010 ,
the green colored Philippine Passport will no longer be accepted even if it is still valid . Below are the list of new requirement for the application and renewal of Philippine Passport.

FOR NEW PASSPORT/MINOR BELOW 18 YEARS OLD
1. AUTHENTICATED BIRTH CERTIFICATE
2. AUTHENTICATED MARRIAGE CONTRACT OF PARENTS IF MARRIED. IF NOT PARENTS ARE NOT MARRIED, AFFIDAVIT OF ILLEGITIMACY
3. 3 COPIES PASSSPORT SIZED PICTURE W/ROYAL BLUE BACKGROUND WEARING DARK COLORED POLO/BLOUSE
4. DULY FILLED UP APPLICATION FORM, IF 8YRS OLD & ABOVE DON'T SIGN AND DON'T AFFIXTHUMBMARK. BUT IF 7 YRS & BELOW, FORM SHOULD BE SIGNED AND THUMBMARKED BY MOTHER
5. ORIGINAL VALID PASSPORT OF MOTHER
6. PHOTOCOPY OF SCHOOL I.D. IF STUDENT
7. IF TRAVELLING WITHOUT PARENTS NEED DSWD CLEARANCE AND ORIGINAL PASSPORT OF TRAVELLING COMPANION

Well, after a few days, I got again another forwarded e-mail with the subject: [Balitang_Middle_East] FALSE ADVISORY on PASSPORT Circulating in the FILIPINO Community with the following attachments. 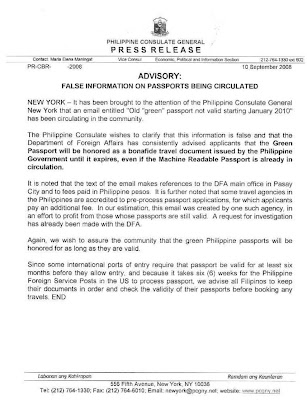 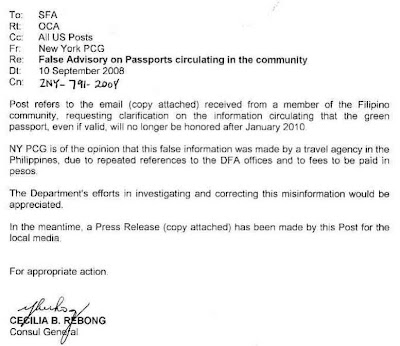 Well, what can I say now? I'm confused as the press release in the attachment was dated September 2008 which is already old and so I had to check the DFA website and here's some of the pages which might be helpful to you

If you want to apply, here's the DFA MRP Application Form

So, which one should we believe in and what do we do? DFA's announcement saying that the green passport will still be honored beyond January 2010 should settle the issue. However, if cost is not a constraint to an individual (especially for those who travel frequently to "strict" countries, I would rather have the green passport converted to MRP.

I wouldn't want to be delayed and held up for further investigations with the suspicion that my Arabic-sounding family name is linked to the Al Qaeda or Abu Sayyaf just like what happened to me in Heathrow London and Charles de Gaulle Paris last 2007 and repeated again in Caracas, Venezuela last three months ago.

Thanks Dads, this is what I should call now as responsible blogging!