The Year That Was and The Year To Be! 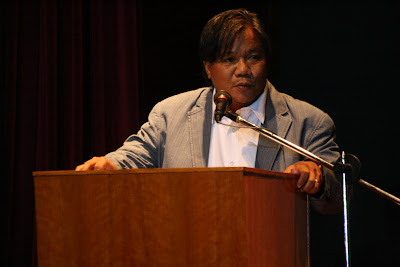 Closing the 2nd International Pinoy Expats/OFW Blog Awards held at the Philamlife Auditorium, UN Avenue, Manila, Philippines on 27.December.2009
The gifts and presents are all opened, the champagne bottles are all poured and emptied, holiday’s parties are all over, the lights and decors are now placed back in boxes that will only be opened again when the ‘ber’ months come again… Now what? The New Year means that it's time to start afresh. But before we talk about resolutions and plans, let’s take a peek at the year that was?

The year that was, was opened with the historic inauguration of US President Barack Obama as the 44th US President and as the 1st African-American US President who was also awarded the Nobel Peace Prize for 2009 in October.

It was a turbulent and calamitous year. The world is changing owed to global warming as a consequence of man’s abuse of the environment, more natural disasters – glaciers are melting, sea levels rising, flood in the desert…

It was also the year when we saw the meltdown of Wall Street that affected everyone globally. Thousands of OFWs lost their jobs and were sent back home.

Zeroing in on the Philippines, the year tested the people’s level of enduring challenges and survival. We had our share of everything: maritime disasters that we never learn from; calamities brought about by typhoons like Ondoy and Pepeng where hundreds perished and thousands were rendered homeless; the eruption of Mount Mayon scandalous sex videos of Hayden and Katrina shown the world over; continued scams and corrupt practices in business and in government that have continued to make the country hug top billing in terms of venalities; GMA doubled the national debt to P4.23 trillion while poverty rose tremendously and will be leaving at least P300 billion in budget deficit for 2009; the despicable Maguindanao massacre that has made the Philippines the most dangerous place for journalists and has added more shame to the Filipino nation in the whole world.

The year was sure loaded with many problems, but it also brought success to Filipinos showing how resilient the Filipinos are in the midst of adversity. We have witnessed the heroism, compassion, and great achievements of some of our compatriots who made us proud - Manny Pacquiao made history by winning his 7th title in seven boxing divisions. We also have Efren Peñaflorida who won CNN hero of the year for his ‘kariton’ education. We also have Charice that made us proud of.

Even if globally, the economic recession had taken its toll on a lot of countries and industries, it was a year that mankind could be thankful for with the start of a gradual upswing of the economy during the middle of the year.

On the home front, God has so blessed us! It was a great year for the family and I could not expect for more! I have visited the family thrice during the year… everyone’s healthy and safe… Chloe, still the athletic and health-buff kid… the kids excelled well in school… Gabrielle ranked number 1 in her class and among the top in the first year at science high… Kevin’s guitar playing has been harnessed and made a number of music compositions… family trips to Hongkong, USA and Saudi Arabia… Chris renewed and Kevin getting their 10-year US visas… Kevin has turned 19 and allowed to drive the car (also allowed to have a girlfriend)… Chris’ safe travels from the house to her court sala… good job in the desert… relationships with friends and families… new friendships… and many more. 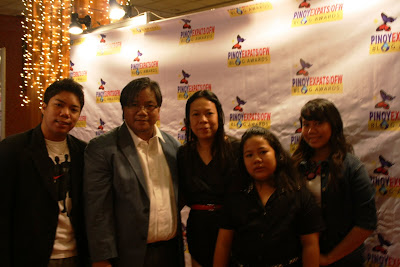 One highlight for this year was the registration of the Pinoy Expats/OFW Blog Awards (PEBA, Inc) with the Securities and Exchange Commission (SEC). That milestone in the history of PEBA, Inc. paved the holding of the 2nd International Pinoy Expats/OFW Blog Awards in December 27 at the Philamlife Auditorium in Manila. It was a proof of the Filipinos' "bayanihan spirit" to organize and plan this big event even if no one knows each other personally before this event. It was the first time for all of us to see each other in the physical world as previous conferences and plannings were done in the virtual world. 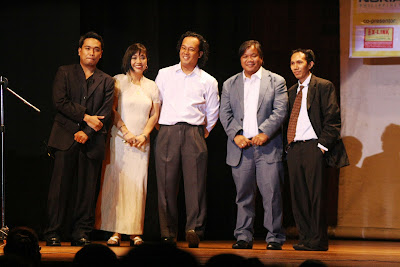 Some people behind PEBA 2009... A lot are behind the scene

What do we look forward to in the year to be?

I just hope that in 2010, we have all learned our lesson, especially in the coming May elections. May 2010 be a year of awakening for us as a people: May we not play around with our vote lest we get the kind of government that we deserve. May we elect a president of the people, for the people and by the people. May we not neglect our environment lest nature again unleash her fury. May we spend our money wisely lest the next financial crisis catch us unaware. May we all do our duty as Christians and be our brothers’ keepers.

I hope and pray that the year 2010 would be bright and bountiful for all of us under the blessing of our Lord Almighty.

The goodness and blessings of the year to come are just within us and around us: Our being healthy, the closeness of our families, and our relationship and strong dependence on God. These made up the year that was and will make up for the year to be. To God be the glory forever.