I am not sure if this Open Letter of Korina Sanchez for RG Cruz was really written by herself but I have seen this posted in Facebook since yesterday noon. Thanks to my Facebook and UP Kalayaan and Molave dormmate-friend Inday Espina-Varona for sharing this in her Facebook status: "PAGING RG CRUZ OR KORINA (or Ichu)... BUT WTF WAS THAT ALL ABOUT? What did RG write to get her wrath? Huli ako sa balita...His public posts don't mention Korina at all...." Browsing through her FB account, I saw her earlier comment: "I lost breath reading the letter aloud :) (Posted by lawyer and UP Prof. Marichu Lambino.) So this is Korina unedited? Ehem. Wow." and saw this link to Scoop: Korina Sanchez’s openly circulated letter against ABS-CBN reporter RG Cruz, belittling him & asking for sanctions for a Facebook entry about an unnamed “First Lady wannabe”

This open letter for RG Cruz, a television journalist of ABS-CBN News was Korina's reply to the former when he wrote about the "First Lady wannabe...who would be a bad spouse...a queen in her head without a crown..." in his Facebook account. 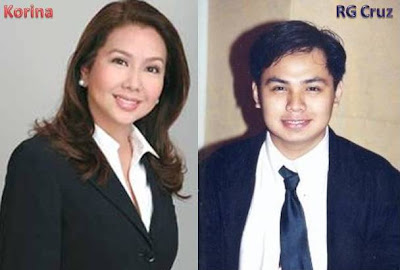 Here's the open letter as re-posted from Notes of Marichu C. Lambino

I thought, not too long but hard, about writing this letter about someone who I supposedly work with but hardly know — someone who, should I see along our company corridors, I probably wouldn’t even recognize. While some characters would sit back, relax and ignore the nuances and irritants of daily living, some characters such as mine are the types who would see and know, by experience if I may add, that evil prospers when good men do nothing. While there is wisdom in silence, there is nobility to be found in response and courage — as foolish as some might think these to be, given specific circumstances.

Such was my thought process when I decided to write this letter. As inconsequential to my universe as someone, whose opinion I do not care about at all, is — there is something to be said here and something to consider. It is for the greater good among us who, fortunately or unfortunately, have to work with each other in ABS-CBN for, precisely, the greater good.

I received the calls and texts to me from longtime co-workers and colleagues at the station recently. They say, “Ma’am, do you know what RG Cruz has been posting on his Facebook against you? Why is the company allowing this? How could he say such things? Do you have some war going on with him?”, the person at the other end of the line sounded so urgent. This is the 3rd person to tell me of the Facebook entries by an RG Cruz within a few days about a “First Lady wannabe …who would eventually be a bad spouse…a queen in her head without a crown… ” and some. We have copies of all of the RG Cruz entries on his Facebook. Suffice it to say that the tirades against who Cruz eventually admitted was Korina Sanchez were as creative as creativity can many times be

Borne of spite and utter, utter hatred. It reminds me of the creativity of serial killers from history. Jack the Ripper for instance — who kept the English police guessing and following and analyzing each way the pattern was kept alive with each of his dead, mangled victims.

I thought hard, “RG Cruz? RG Cruz…Oh…RG Cruz, oh that RG Cruz”. He always wears a long coat much like Keanu Reeves in the movie Matrix. I once thought it to be cute and fantasized my fiancé Mar in one of those wondering, “Hmmm, maybe this outfit would do it for him and give an extra 5 percentage points in the surveys”. Alas, we always have the same reaction to every idea — it is ability, track record, integrity, honesty, diligence, intelligence, compassion and vision that should bring an aspirant to his rightful place in history — stupid. Not long coats!

Back to RG Cruz. Yes, I remember now. RG is the cute little young guy who I actually kind of like. I thought from his outfit and from watching one anchoring job he did in ANC that this guy has character. We would often walk by each other going different directions in company corridors late at night when I anchor Bandila. Many of those times I try to catch his glimpse to smile but, for some reason, he always has his head down or he would look some other direction. Half of that time maybe it was I looking down and at other directions. In short, and as astonishing as it apparently is, I don’t really know nor have interacted or worked, nor do I ever remember having had conversation with Mr. RG Cruz. And I do not know where his concentrated anger targeted towards me is coming from.

Skin off my nose. He doesn’t count. But here is where we learn some things, yes, even in instances that should seem not matter. Sad as it is, it is not surprising that, in my experience of more than 20 years of work in the company, there may always be someone like RG Cruz who will just be the way they are without rhyme or reason. There have been many batches before RG that I have seen, suffered and survived. I guess he represents his batch. My advice is, ignore. And then, when you feel it has become too much, report to our superiors. If the regulations and the law warrants, push for management action, even a sanction, even a lawsuit.

Logic dictates that, just as we are all bound by regulations and ethics regarding how we relate and treat each other within the company, these parameters encompass treatment of each other that is public, evident, attestable. Facebook, designed as it may be for “friends”, is essentially public. Slanderous comments are, arguably, considered published. “Blind item” lawsuits have been won in Philippine courts as well. As long as more than a certain number of people can identify, without a doubt, the unnamed victim of slander and character assassination, the offense is actionable.

I, by the way, do not understand why Mr. Cruz would bother to not mention my cherished name in his attacks against me when he outright named another company talent, Mr. Willie Revillame, and attacked him as well.

In the interest of sound policy covering such misdemeanors to protect its employees and talents and maintain the civility required of us all to achieve company goals — as painlessly as humanly possibly — I have inquired with management and have urged them to take a closer look at the cyberworld as public domain and which is a potent instrument for destruction and unwarranted personal aggravation of its victims, especially in the hands of co-employees.

Lastly, but most importantly. It has been almost 6 days since Sen. Mar Roxas’ abdication of position of standard bearer of the Liberal Party of the Philippines to endorse Sen. Noynoy Aquino as party candidate for the Presidency of the Republic. I’ve seen it and felt it for myself: it is the easiest thing to have an ambition, calculate and run for office. It is the most difficult to want to serve, calculate, invest and then give way. Until you see and be, it would be a task for any jaded journalist to imagine.

The overwhelming outpour of love, grief, disagreement with the decision, admiration and emulation which followed Sen. Roxas’ example has carved a niche for his good name in Philippine history books this early in his life in public service and governance. I would like to thank many of you who have called to say how they’ve admired Mar’s sacrifice. To those who challenge the integrity of Mar’s sacrifice and may dismiss it as expediency I invite you to a chat as I might enlighten you on things you might not be fully informed about or aware of. I give special thanks to Ted Failon, Julius and Tintin Babao, the people of DZMM News, Joelet Reyes, the other staff of Bandila, Ging Reyes and Charie Villa, Ms. Cory Vidanes and our President Charo S. Concio for their kind and generous words.

Many of us in the news business have often thought, felt that we are as big or powerful as those we cover. Our indifference and sarcasm say so. And too many times I have, myself, dismissed acts of greatness and sacrifice as just “one of those things”. Having taken this long a leave of absence from my years of work in broadcast for the first time and finding myself participant in something so important to this country, its people and its future I now see even more clearly how small and insignificant each of us is in the much bigger picture affecting 90 million lives. That is, until we think, act, speak and, most of all, do something to become the difference, make a difference for the good and become … bigger. Or do something or nothing to make us even smaller, more insignificant. We might as well just disappear.

So to you, RG Cruz, I say, I hope that — as your Facebook entry narrated — as you were “eating chocolate” and indulging your gastronomical cravings while events at Club Filipino on the 2nd of September 2009 were unfolding and all you could think of and delight in, as written in your Facebook, are your cruel attacks, pettiness, inanities and insensitivities to the sacrifice of others and, horror of horrors, make these public — you will, henceforth, attempt to save yourself from the very real prospect of disappearing, leaving this world without a trace, no better and even worse than when you found it.

By the way, did you know that Jack the Ripper loved chocolates, too? Look it up.

“P.S. I have attached an interesting article written by Ms. Solita Monsod – which I highly recommend for your reading. I encourage you to pass this letter to anyone at the office or outside who may had read RG Cruz’ attacks against me and my name as a matter of defense of my character and reputation. Thank you very much.”

I tried to 'connect' the article of Mareng Winnie with Korina's letter but until now I still couldn't 'fathom the depth' of the link. Nosebleed nako di ko parin ma-getz...