My Right to Election 2010: The Overseas Absentee Voting (OAV) Registration


After all the blahblahblah... have we registered for the 2010 election?

Funny at how many of us join in discussions about the Philippine political scenario, giving strategies on how a politician could win the election, etcetera... up to the point of fighting out with our last breath up to the last drop of our blood in defense of a lucky clown who does not even know who the hell we are, then when the million dollar question is asked, we coyly answer on the negative.

When I posted the blog Gearing Up for Election 2010: Will Overseas Absentee Voting Make a Difference? last February 8, I was all set to register within a few weeks after that blogpost but the Filipinos’ infamous "hasta mañana" habit almost cost my ticket to choose the next leader in the 2010 Election.

If I was not scheduled for my vacation on the 22nd of August to the first day of September, I could have extended that enlistment up to the last day of the OAV registration on August 31. I bet you, without that vacation schedule, I would probably have forgotten all about OAV. So to put my hand where my mouth was in that blogpost, I had to do it even when the sandstorm was raging mad along the Al-Laith - Jeddah Super Highway that Thursday afternoon of August 13. I braved the very low-visibility highway to be able to reach the Philippine Consulate Office in Jeddah.

Here are some of the snapshots taken from my mobile phone that afternoon: 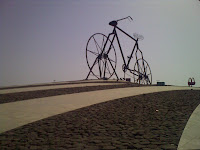 The famous Giant Bicycle Square which is known as the world's largest bicycle according to the Guinness Book of Records. This is the landmark that I always look at to know that I am near the Philippine Consular Office in Jeddah. The Bicycle or “Darrajah” in Arabic is located at the center of Siteen Road and Amir Abdullah Street. 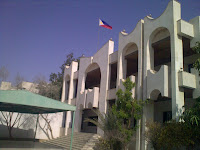 This is the facade of the Philippine Consulate in Jeddah. It is located in Al-Sayeddah Kaddija Street, Al Faisaliyah District. 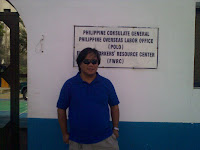 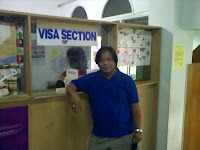 Took the chance to pose in whatever place I can especially that there was no one who will call my attention and say, "Lalalalala" (Arabic for saying No! No! No! No picture taking here!) 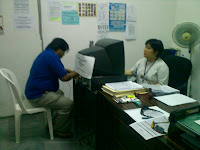 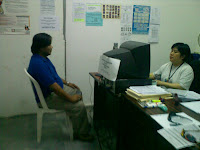 Here I was with my finger print taking, signature and ID picture taking.


Here is the acknowledgment receipt of my OAV registration. (A proof that I'm temporarily registered)
I still have to wait for my ID which will be mailed by COMELEC after a few months 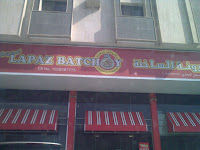 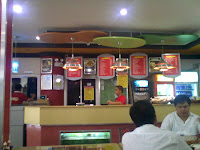 My OAV registration calls for a simple celebration at Jeddah's La Paz Batchoy Restaurant. I tried their Batchoy, Bulalo and Grilled Beef but i will reserve my comments after they will sponsor PEBA 2009...hahaha 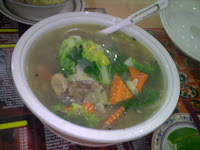 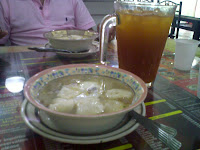 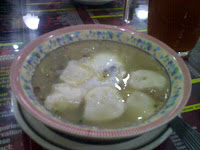