I’m no American Idol fan but my kids are, especially the two girls who would get so excited watching the show. They were initially cheering for the early favourite Danny Gokey until he was ousted by virtue of Kris’ rendition of Kanye West’s ‘Heartless’. After Gokey’s departure from the competition, I knew they rooted for Kris Allen but were sceptical that he will come out the winner as he was earlier considered a long shot heading into the battle for the top two spots. They well knew that the more popular Adam Lambert, who was considered the frontrunner since early in the season, was going to win it... hands down.

Lambert always dazzled the audiences and the celebrity judges with his falsetto singing style, black nail polish and daring wardrobe. He had off-the-charts vocal range and dramatic flair. Adam Lambert got a great voice. He has the wit and boldness to use this talent for a maximum blow. He represents a social potential – that of politics of sex and identity and I admire him for being true to himself.

Nevertheless, the clean-cut Arkansas student and a devout Christian church worship leader Kris Allen, won over audiences with his all-American good looks and by putting his personal spin on popular tunes. He was himself shocked when he unexpectedly won the eighth season over singing rival Adam Lambert on the most popular U.S. television show. 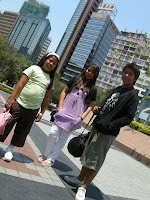 So, contrary to ‘expectations’ but to the delight of my dearest kids – Kevin, Gabrielle and Chloe, "The underdog, the dark horse, comes back and wins the nation over!" This is how host Ryan Seacrest said in announcing the result of the viewer vote.

I always have that soft spot in my heart for the underdog, the "dark horse." The one in the pack that's not expected to rise and win. That is something which my 3 kids got from me and my wife – having that heart for the darkhorse.

For the past two seasons of the American Idol, the darkhorses David Cook and Kris Allen triumphed over the favorites David Archueleta and Adam Lambert. It happened twice and we’ve got to learn something out of this. There’s a life lesson in here – that of people’s exploring their full potential even in a judgmental setting that believed the contrary. It’s a lesson where one can grow, reach goals, prove himself, and surprise everyone in the end.

Yo kids! With all the commercial trappings that the American Idol has, let’s look at it as more of life’s lessons than just a popular US television show. It’s a lesson about character than just competition, and more about what people could become than what they could have been had the wrong choice was made.