I am reposting this article because I believe that the over 12M OFWs around the globe is a big voting bloc to reckon with which will definitely reshape the landscape of Philippine Politics. Whether or not the OFW is registered as an Overseas Absentee Voter (OAV), he can still participate by convincing members of his immediate families and relatives to actively participate in the election processes and to vote for the right candidates, especially those who look after the welfare and protection of the OFWs.

We can make an impact in this election from our collective efforts to act as one strong force. Let's show that we can indeed make a big difference in the Philippine political scenario. 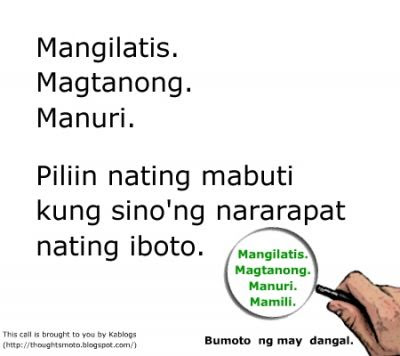 For decades, we've been lauded as "Bagong Bayani" as a recognition by the same government who has caused our mass exodus into foreign lands.

Let's breathe the title of modern day heroes and accept its appended challenges and responsibilities. Despite our distance and diversity, we take pride in being a part of the Filipino abroad’s global recognition as shapers of the world.

Now, the time has come to unleash the heroes within us as the majestic sun rises in the East and its rays of hope shines upon our nation this coming May 2010 election.

This is a call for our collective voice in the 2010 election. We encourage all Overseas Filipino Workers (OFWs) and their families to actively participate and be part of our country’s historic electoral process.

For several years, we’ve made our presence felt in building our nation. In every single dollar remittance that is being delivered in our family’s doorsteps, we OFWs have helped in sustaining the Philippines’ economic growth.

Our experiences in and out the country have led us to become seasoned professionals who are now politically mature to discern what’s best for our home country. Now is the moment to make a difference. We are part of the 12 million Filipinos dispersed across the world and we can definitely make a difference.

We will solidify our stand to choose the right leaders for our country. We will influence our family and loved ones back home, the recipient of our hardships and struggles abroad, to act too. We will guide them in making their choices this coming May 2010 because we believe that their actions will not only shape our country’s future but the future of the generations to come.

Our nation has suffered from the action (and inaction) of irresponsible and corrupt government officials but we must remain steadfast in our hope and desire of having a better country. Our nation is already battered and divided. This coming election, its fate resides in US.

If there is a time to live as modern day heroes, to make a difference as global Filipinos, to embark on something worth doing, IT IS NOW!

Let us empower ourselves as OFWs. With one voice and one heart, let's vote and get counted! Only responsible voters can bring responsible leaders in office on May 2010. Let the new leaders of our land rise from the votes of OFWs.


(PEBA and KaBlogs encourages all OFW bloggers to repost this article in their blogs, FB Profiles, Twitter, Plurk and others. Kindly circulate this post to all OFW and their families. Spread this message of hope that our votes can make a difference. Thank you.)
©2010 Pinoy Expats/OFW Blog Awards
Jebee Kenji Solis is an OFW based in Al Khobar, Saudi Arabia. This post is a joint call from the Pinoy Expats/OFW Blog Awards, Inc (PEBA, Inc.) and the KaBlogs (Kabayan Blogs) where Kenji is the Founding Chairman. With over 300 Linklist of OFW/Kabayan Blogs from the Philippines to all the nook and corner of the globe where the Filipino diasporic community is found, PEBA, Inc. and KaBlogs believes in the power of the blogs to transform and influence the outcome of the Philippine 2010 Election.
Posted by NJ Abad at 2:57 PM