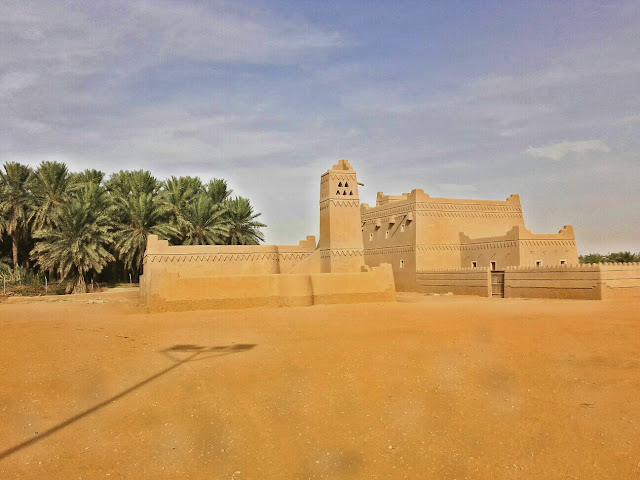 We were on a business trip to the Watania Poultry Institure of Technology (WIT) Al Qassim last Tuesday, 20th October 2015.  I will be writing a post about that visit later. :-)

It was my first visit to this part of the central region of Saudi Arabia, said to be the richest province in the kingdom. Al Qassim's area combines the sands of the Nafud desert and the surrounding greenery of the countryside. It has abundant supply of natural water and towering Palm trees could be found anywhere you put your eyes on. No wonder that the finest of the dates in the world are produced in the province.

Our business meeting at the WIT Campus located in Buraidah was finished at past 1 and we were invited for lunch at the Ramada Hotel and Suites in Al Bukairiyah, the adjacent city. The Saudi trait and quality of hospitality will surely cause one to cheat and forego a diet plan. After lunch, we had a tour at the Al Swailem Maqsorah, the Solarium Al Rajhi, the Al Musawkaf Traditional Market in Unaizah,  a visit to the dates shops, and then a tour to a Dates Farm Resort. I will be blogging about these places later but the Solarium Al Rajhi will be my first photo blog of the tour.

You probably know why I will blog about this first. I have always been a big fan of the Chairman of the company that I work in, here in Saudi Arabia. It's the same company that I worked with since I became an OFW in 2004. In fact I had a post about our Chairman, Sheik Sulaiman Al Rajhi a couple of years back.

The visit to his ancestral home was indeed a pleasure and excitement to experience.

Nestled in a date tree plantation is the Solarium Al Rahji, more commonly known as the Al Rajhi Family Heritage Home (Arabic  مقصورة الراجحي بعدستي المتواضعة). We came at a time when the place was still close. It is only open to the public after Maghrib Prayers. Much as we wanted to look into the inside of the ancestral house, we had no choice because our flight back to Jeddah is during Maghrib time.

Located at the southeastern part of the central farms in Al Bukairiyah is Solarium Al Rajhi, said to be constructed 250 years ago. It was restored to its original form and was said to approximately cost 15 million Saudi Riyals. It has two infrastructures, a mud cabin and a mosque, made from palm materials and mud. The area has also what the locals call a Suani to raise water to irrigate the dates farm and for the use of camels and other livestocks.

We haven't seen the inteior of the museum but based on the interview with Sheik Sulaiman about how he could have preserved many old and precious things and antiques at Suleiman Al-Rajhi Museum, this is his answer:

"A long time ago when I was in Jeddah, I was keen on preserving heritage pieces and gathered them together, especially those related with money exchange. There would be a history with every human being. The museum tells the story of money exchange. I particularly kept registers and cash boxes that were used when I started the money exchange business. The first cash box was made of wood, and there was a huge treasure box in which we kept our gold and silver. The artifacts kept at the museum tells the evolution of currency in the Kingdom through issuance of bank notes, as well as some currencies and coins that were in circulation among the Haj pilgrims. A major factor that prompted me to set up the museum was the visits made by a large number of officials from various countries to know more about these old coins and currencies. We have had to exhibit these rare collections in front of them to explain about our history and heritage, especially those related with money. I was keen to furnish the museum with historic and heritage pieces, especially with the same materials used for construction in the past. Hence, the roof of the museum was made of palm branches, and that was the case with the seating arrangements at the museum."


Here are the snaps I took during our visit to the place.

Who are the Al-Rajhi family? Where did they come from? Who is the founder of the Al-Rajhi family The You Tube video below (in Arabic) will answer your questions. It will also show the interiors of the heritage home, something that we missed because time constraints.

Posted by Desert Aquaforce at 4:01 PM