An ala Dan Brown's Da Vinci Code...Impersonating or an Impostor? 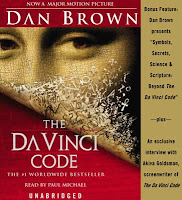 There are days when we just forget ourselves... who we are and do things which we don't normally do. We don't even think about what our actions will bring - whether or not it will affect the people around us - especially the people most dear to us.

Today is one of those days. It started with the plan to surprise. We often hear "bosses" say that they hate surprises. But I know surprises would be most welcome if it's a good surprise and I know the surprise I had was most welcome - 100% guaranteed!

Other mails followed that day with no mention of this particular message. For fear of a possible terroristic plot by the dreaded 'iloveu' and 'whatabeautifullife' computer viruses, the recipient thot it was one of those spams (similar to those viagra, cialis, penis enlargement, medicines, jewelries, etc spam mails we often get in our mailboxes). She thought of deleting it and let the message be forever lost in oblivion.

Well before moving on... and speaking of spam mails, here's one anecdote of one of our modern day unsung heroes working under the scorching heat of the sun in the desert. He's not so familiar with the computer and about spam mails. He got a lot of those spam mails talking about - 'making an important change in your life', 'enlargement was never so easy before', 'you'll never be unhappy anymore', 'how to grow 6 inches in 3 days', 'be a real boner', etc...and all those sort of hullaballoos...Well, he got really disturbed...so much disturbed with all those spam mails he got. He can no longer help but sought the help of another 'modern day' hero connected to the IT Department. He inquired on who sends those mails... and mentions that nobody knows except himself... how were they able to know? Whoooaaahhh. LoL...No arraignment yet but he already pleaded guilty!

Back to the surprise email code, I was successful in convincing the judge at the webcourt that the message could probably have some great meanings. After a tough grilling session in the webcourt and afraid of being held for contempt in her webcourt, I was arraigned and pleaded guilty as the master mind of the code. I had no other choice but to spill the leads and mysteries one by one to reveal the code.

To make this blog short, the code was deciphered and the judge at the webcourt declared the case closed. It was a beautiful morning to start afresh the day with fun and excitement. Knowing that some unimportant, 'meaningless' and insignificant things in our lives may bring about good surprises to us.

One might try to decipher the code... I challenge you. Once you get it right, we'll have dinner together at Caspers&Gambinis.
Posted by NJ Abad at 12:11 AM