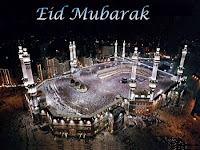 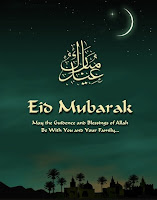 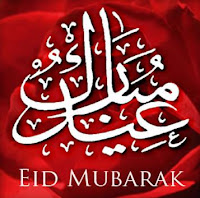 Eid Mubarak to all Desert Aquaforce readers! It literally means a "Blessed Festival"and can be paraphrased as "May your religious holiday be blessed." It's a way of saying "Happy Eid" at the time of the Islamic Eid holidays. It is a phrase of greetings that is said among Muslims to congratulate each other on holidays. The appropriate answer when someone greets you is, "Allah yubarak feek!"(May Allah bless you also!) This phrase can be applied to both Eid al-Fitr (Ramadan/Fasting) and Eid al-Adha (Hajj/Sacrifice).
Today, the whole Islam world celebrates Eid Al Adha. It is one of the special festivals of Muslims and it is also known as the festival of sacrifice. On this festival Muslims sacrifice their domestic animals like goat, sheep, cow, camel etc. This sacrifice made by Muslims is a symbol of sacrifice made by prophet Abraham - commemorating his willingness to sacrifice his son out of obedience to God.
Christians believe that the son brought by Abraham to be sacrificed was Isaac, his son through Sarah. Islams on the otherhand, believe that it was Abraham's son Ismael through Hagar that was brought by Abraham.
The Quran says that Muslims should understand that the sacrifice itself, as practiced by them, has nothing to do with atoning for their sins or using the blood to wash theirselves from sin. This is a misunderstanding by those of previous generations: "It is not their meat nor their blood that reaches Allah; it is your piety that reaches Him." (Qur'an 22:37)
The symbolism is in the attitude - a willingness to make sacrifices in the Muslims' lives in order to stay on the Straight Path. Each of them makes small sacrifices, giving up things that are fun or important to them. A true Muslim, as they claim is one who submits his or herself completely to the Lord, is willing to follow Allah's commands completely and obediently. It is this strength of heart, purity in faith, and willing obedience that the Lord desires from them.

What we Christians Believe In Differs in the Seed...
God promised to bless Abraham by making of him a great nation, and by blessing the entire world though his seed. When a famine occurred in Canaan, Abram went to Egypt. Fearing he might be killed and his still beautiful wife might be taken in marriage, Abram passed off his wife Sarai as his sister. This put at risk the promised “seed,” which would come through Abram and Sarai. Pharaoh took Sarai into his harem, but God prevented a consummation of this “marriage.” Pharaoh learned that Sarai was Abram’s wife and rebuked him, escorting him back to the land of Canaan.
After Abram and Lot were separated and Lot was taken captive, Abram went to his rescue. After Lot’s successful recovery, Abram met Melchizedek, a mysterious king to whom Abram offered a tithe. Reiterating His covenant with Abram and promising him a son, Abraham believed God’s promise, and his faith was reckoned to him as righteousness.
As the years passed, Abram and Sarai became concerned, since no son had yet been given them by God. They decided that it was only necessary for Abram to father the child and that Hagar could serve as the mother of the child, in Sarai’s place. At age 86, through Hagar, Abram and Sarah had a son, Ishmael. This son as what we believe in was not the “son of promise,” but God would care for the land as He had said. At age 99, 24 years after God first promised a “seed” for Abraham, God reaffirmed His covenant with Abram and Sarai. He changed Abram’s name to Abraham and Sarai’s name to Sarah. The next year, God promised, they would have a son. God commanded Abraham to be circumcised and to circumcise all the males in his household. Circumcision was to be a sign of God’s (Abrahamic) covenant for all generations to come. Thus, years after he was declared to be righteous, on the basis of his faith Abraham was circumcised.
Abraham and Sarah had Isaac. Sacrificing this son of promise was the greatest test of Abraham’s life, but it revealed that Abraham had finally come to trust in God as the One able to give life to the dead. It was at this situation that God proved Himself to Abraham as Jehovah Jireh - God will provide!
Posted by NJ Abad at 11:01 PM